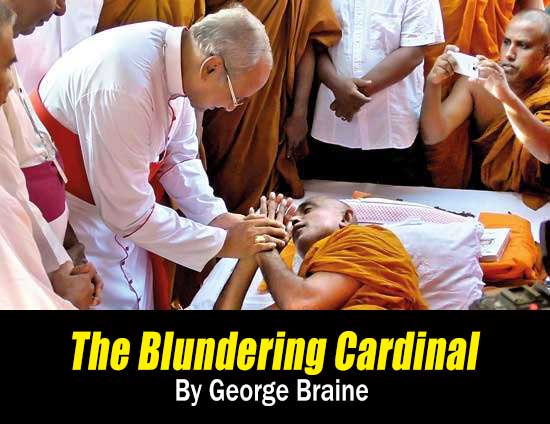 (Lanka e News -16.June.2019, 5.40PM)  Sri Lanka’s first Cardinal, Thomas Cooray, passed away in 1988, and for decades, he was not replaced. In 2007, President Rajapakse and his wife Shiranthi, a Catholic, visited the then Pope, who asked Rajapakse what he could do for Sri Lanka. Rajapakse replied. “Give us a Cardinal”. (I heard this from a trustworthy source.)

The appointment of a top cleric, such as a Cardinal, to a non-Catholic country like Sri Lanka, has to be weighed carefully. When a suitable name comes up, the Vatican would consult the head of state to ensure that the person is acceptable to the government before the appointment is made. For instance, I don’t think a Tamil would ever be appointed a Cardinal in Sri Lanka. I assume that, when Rajapakse was asked, he perhaps recommended Malcolm Ranjith, or gave his approval to the nomination. Malcolm Ranjith knows this, is ever grateful to Rajapakse, and, since he became Cardinal in 2010, has shown his loyalty to Rajapakse in a number of ways.

Thousands of civilians died at the end of the Eelam war. No disputing this fact. But Rajapakse, fearing reprisals, has denied this. The issue keeps coming up, especially during the annual UN human rights meetings in Geneva. Once, following the Rajapakse line, Malcolm Ranjith declared that (I paraphrase) “No civilians were killed during the final stages of the war”. How would he know? He wasn’t at the front. Among the civilians killed were Tamil Catholics, perhaps in their hundreds if not thousands.

During the “constitutional coup” last year, when Rajapakse briefly became the illegitimate Prime Minister, Malcolm Ranjith was seen at Rajapakse’s official residence. What on earth did he think he was doing?

The Cardinal, quite foolishly, usually jumps on the bandwagon on popular but controversial issues, especially when these issues align with the Rajapakse/nationalist leanings.

1. Quick support for the death penalty for drug dealers proposed by President Sirisena. Two weeks after he spoke, the Pope delivered him a slap in the face by publicly declaring that the Catholic Church was opposed to the death penalty.

2. “Human rights is a Western concept”, another declaration, this time during a sermon. What was he thinking? He probably wanted to align himself with the Sinhala nationalist idea that no human rights were violated in Sri Lanka. He quickly backtracked, but, as usual, the damage control didn’t succeed.

3. Declaring that Sri Lanka is a Sinhala Buddhist country. We do have a majority of Sinhala Buddhists here, but we are the “Democratic, Socialist Republic of Sri Lanka”. Again, Malcolm Ranjith was in tune with the racists/nationalists.

4. Rushing up to Kandy to hold Rev. Rathana’s hand while the latter was “fasting unto death”. The monk is a known racist, and the fast was a political stunt. The Mahanayakes ignored the stunt. But Malcolm Ranjith was in excellent company: the race mongering, Muslim-hating monk Galaboda Gnanasara.

Gullible Sri Lankans have nominated the Cardinal for the Nobel Peace Prize. True, he preached restraint after the Easter bombings, but, did he have a choice? The Bible says “If anyone slaps you on the right cheek, turn to them the other cheek also.” Malcolm Ranjith could not have asked Catholics to go out and slaughter Muslims. In any case, knowing his unpredictable ways, I have no doubt that the Pope, or an aide, called Malcolm Ranjith after the bomb blasts and told him exactly what to say and how to react.

In Sri Lanka, we have militant monks coming out of temples and causing havoc in the country. What we don’t need is a publicity seeking Cardinal behaving impulsively. Malcolm Ranjith should hold his tongue and watch where he goes before the Catholic Church in Sri Lanka becomes the object of ridicule and scorn.

(Dr. George Braine, PhD (University of Texas at Austin) has more than 40 years of experience in teaching English as a second/foreign language at the primary, secondary, and tertiary levels. He has taught students and teachers from a variety of language backgrounds in Sri Lanka, the USA and Hong Kong.)