Right wing politicians have taken up cudgels against Navy officials testifying against senior rankers implicated in an abduction for ransom racket in 2008-2009. Investigators worry the campaign of intimidation could hamper the probe and deter key witnesses from coming forward

In 2012, Naval Intelligence officer Lieutenant Commander Krishan Welagedara became one of the CID’s key witnesses in an investigation into a gory abduction racket by Sri Lanka Navy personnel in 2008-2009. Welagedara’s statement helped the CID to establish that 11 young men abducted from Colombo were held in subterranean detention cells at the Trincomalee Naval base. 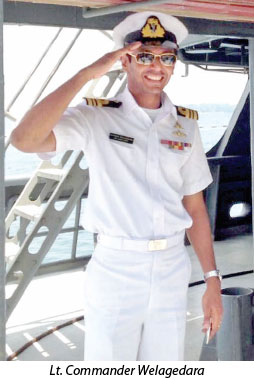 Lt. Commander Welagedara’s life has not been the same since. As CID sleuths close in on high ranking naval officials linked to the abduction case, right wing politicians are turning their guns on key witnesses in the case like Lt. Commander Welagedara. With the political tides shifting, hard line elements have been emboldened, resulting in threats and intimidation levelled against several witnesses cooperating with law enforcement in the high profile case.

Officials familiar with the case told Sunday Observer that as investigations near conclusion, the constant threats to witnesses have hampered the probe and distressed potential witnesses to the abduction case. As the 40th Session of the UN Human Rights Council nears, the campaign of intimidation has worsened, these officials claim.

For instance, earlier this week Lt. Commander Welagedara was publicly named and shamed by National Freedom Front (NFF) politico Jayantha Samaraweera at a press conference. Making a statement which can be construed as a threat to a witness in an ongoing legal case, Samaraweera, addressing journalists,alleged that Welagedara and two other key witnesses, namely Former Navy Commander Admiral Travis Sinniah and Rear Admiral Shermal Fernando were giving evidence in the case in return for political favours.

The NFF politico also accused the CID of attempting to frame false charges against former Navy Commander Admiral Wasantha Karannagoda, and arrest him before the UNHRC sessions kick off on February 25.

“Who are the actors who acted out this play? Krishan Welagedara was promised asylum in Australia, Sinniah was given the post of Navy Commander and Shermal Fernando was appointed as the Director General of Customs as a result. They were treated and now Karannagoda is to be taken to the guillotine by the Government” Samaraweera alleged.

Speaking to the Sunday Observer, a close member of Lt. Commander Welagedara’s family said the statement by the NFF politician had been deeply upsetting. The witnesses in the CID’s case were being portrayed as traitors to the country, the intelligence officer’s relative said. Afraid for the lives of his wife and children, the Welagedara has applied to migrate to Australia under the skilled migration program. The Navy Officer’s wife, formerly a Sri Lanka Air Force aeronautical engineer was the main applicant. The NFF MP claimed Welagedara had got asylum in Australia in exchange for testifying against senior naval officials.

Since the press briefing, the naval officer and his family are living in fear of reprisals by suspects in the high profile abductions case, who continue to hold senior operational positions in the Sri Lanka Navy.

For years, Welagedara has been persecuted by the Navy for his testimony in the case that has implicated several high ranking naval officers. The harassment has been so severe, that the Lt Commander is now seeking early retirement from the force, but family members claim even that is being blocked by ultra-nationalist UPFA MPs. Wimal Weerawansa, the leader of Samaraweera’s party, sought a high level meeting last week to advocate on behalf of high ranking naval officers implicated in the abductions racket.

He was accompanied by Commander Sumith Ranasinghe, the main suspect in the case, and then officer in charge of the unit which allegedly carried out the abductions for ransom.

However, Welagedara has not been the lone witness in the controversial case of 11 missing youth who have had to face various trials and tribulations. Yet another witness in the case Lt. Commander Laksiri Geethal who provided evidence confirming that the key suspect of the case Lt. Commander Chandana Prasad Hettiarachchi alias Navy Sampath was present within the Navy Headquarters when the CID went in search for him, seeking his arrest had to retire from the Navy following an attack on him in November 2018.

According to sources, Geethal had not intended to leave the Navy but was almost forced to after the incident. Geethal feared the attack which occurred within the Naval HQ was an attempt to abduct him. He currently remains in hiding while the Navy is said to not have even carried out an inquiry as required of the incident.

Meanwhile, another witness in the case has also mysteriously vanished. B.M. Vijayakanthan, an ex- LTTE member turned Navy informant, who initially provided evidence against several suspects for being part of an abduction ring appears to have gone missing.

While he later turned hostile, law enforcement officials have failed to locate him during a search conducted over the past month. Relieved of his duties from the Navy recently and now untraceable, his fate remains unknown.

Authoritative sources told Sunday Observer that suspicions have also been cast regarding the untimely death of Master Chief Petty Officer Seneviratne, another witness in the case.

The 40 year old Naval Officer was found dead in a paddy field about four months ago. Seneviratne had retired from the Navy one month before he died. Seneviratne is the sailor who led Welagedara to the Gun Site in 2009, where the abducted boys were being held inside the Trincomalee base. His evidence was corroborated by Welagedara’s testimony to the CID.

During the course of its investigations, the CID has faced an uphill battle to obtain information from the Navy. This situation improved slightly following the arrest of the Chief of Defence Staff Admiral Ravindra Wijeguneratne, officials familiar with the case told Sunday Observer. But investigators are concerned the constant threats and intimidation will deter key witnesses from even coming forward. Despite the existence of a National Authority for the Protection of Victims of Crimes and Witnesses since 2016, their harassers have continued the campaigns of intimidation, unafraid and unabated.

Speaking to the Sunday Observer, a member of the National Witness Protection Authority said if victims of crimes or witnesses are facing threats there are four options available to them.

“They should either complain to the authority, the Police unit dedicated for their protection,or to courts or the CID” he said.

However, many witnesses of cases facing threats do not appear to have any confidence in the National Witness Protection Authority. They claim it has been inactive regarding their complaints.

Meanwhile the Sri Lanka Navy has continued to promote and accord privileges to high ranking suspects in the abductions case still serving in the force, while navy officers who have turned witnesses in the case claim they have beencontinuously harassed and persecuted.

Despite repeated attempts the Sunday Observer was unable to contact Navy Spokesman Lt. Commander Isuru Sooriyabandara to elicit a response on the allegations made on the force’s conduct.

Protection of Victims of Crimes and Witnesses

In 2016, Sri Lanka established the National Authority for the Protection of Victims of Crimes and Witnesses as an initial step towards giving effect to international standards and best practices through which the rights of victims of crime and witnesses will be protected. The agency was empowered by the

Assistance to and Protection of Victims of Crime and Witnesses Act, No. 04 of 2015. However, since then, the organisation has failed to gain the confidence of those it was set up to protect.

Relating his experience with the NAPVCW, Journalist and a witness in the Welikada Prison Massacre case, Kasun Pussawela claimed that it was less than satisfactory. The author of ‘12-11-10 Welikada’ which details the horrors which took place in the Welikada Prison was forced to lodge a complaint with the authority after the main suspect in the case Inspector Neomal Rangajeewa, formerly of the Police Narcotics Bureau had acted in an intimidating manner towards him, witnesses of the case and their families, especially on social media after he was released on bail by the Court of Appeal on September 26.

“I lodged a complaint with them on December 27” he noted adding that he only received a response back on January 6. Even then it merely claimed his complaint has been forwarded to the relevant department for threat analysis. Thereafter, Pussawela received the copy of another written communication dated January 31 in which the Director of Law and Enforcement of the Authority directs the Director of the Protection Unit to analyse the threat and see if Pussawela can be provided with security.

Not having heard anything since Pussawela says anything could have happened to him in the meantime. “By the time they decide to take action, the threats made against victims of crime and witnesses could have been already carried out” he noted questioning the purpose of the inactive organization’s existence.

Investigators of the Criminal Investigations Department (CID) are closing in on a former top aide of former Navy Commander, Admiral Wasantha Karannagoda in connection with the Navy abduction for ransom racket. According to sources, the aide, now a wanted suspect currently serving as a Chief Petty Officer in the Naval intelligence is believed to have been part of the abduction for ransom gang accused of kidnapping 11 youth from 2008 – 2009.

Karannagoda is now getting ready to file a Fundamental Rights petition to prevent his arrest by the CID in connection with the eleven murders, according to a prosecutor. A senior police officer said the CID has not yet sought to arrest the former Navy Commander despite having reported significant evidence of his possible involvement in the murders to the Colombo Fort Magistrate’s Court.

The former Navy Commander last year denied allegations that he had advance knowledge of the murders or had sanctioned them. Karanagoda made these denials after multiple witnesses including his former Naval Secretary, Rear Admiral Shemal Fernando, provided evidence of these allegations to the CID.