Pro Rajapaksa websites and Twitter trolls have turned their guns on the Tamil National Alliance whose 14 MP bloc has voted to defeat fake Prime Minister Mahinda Rajapaksa in Parliament four times and remain unwavering in their determination to defeat the October 26th Coup. 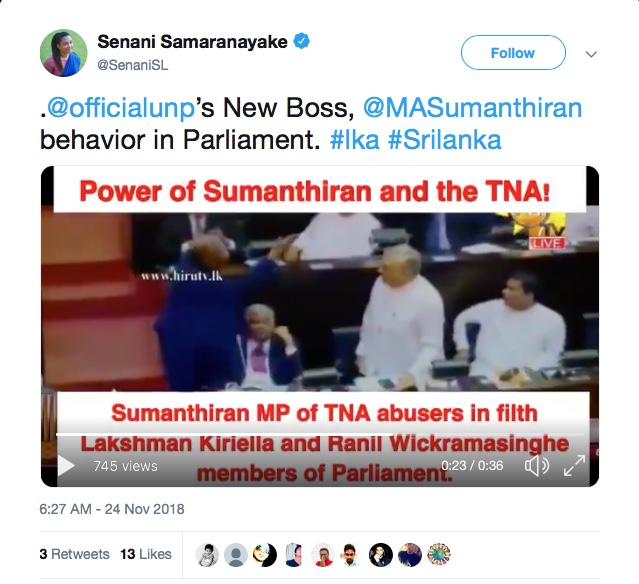 CMC SLPP councillor Senani Samaranayakewho is a former SriLankan Airlines stewardess of dubious fame after Namal Rajapaksa ‘outsourced’ her services at the Presidential Secretariat while getting the bankrupt national carrier to foot the bill has attacked TNA MP M. A. Sumanthiran on Twitter using a video of Friday’s parliamentary sittings out of context.

“UNP’s new boss Sumanthiran behaviour in parliament” Senani tweeted highlighting the video which shows Sumanthiran leaving his seat to go up to UNP MP Lakshman Kiriella and gesture wildly at him after 122 MPs voted against Rajapaksa for the fourth time to wrest control of an important parliamentary committee that will decide business of the House. While it appears that Sumanthiran is expressing some emotion as he explains something to Kiriella the story is far from the version of the truth Senani and other members of the Namal brigade are spinning to discredit the TNA MP. The text in the video also claims Sumanthiran abused Kiriella “in filth”.

After the Speaker of Parliament took an electronic vote on the composition of the Committee of Selections in Parliament, while allowing five MPs whose vote had not registered on the electronic system to vote by name, Lakshman Kiriella rose to request another vote by name. Kiriella said his party wanted MPs to stand up and cast their votes by name “for the whole country to see” the majority against Rajapaksa.

The Speaker agreed to do so if a majority of Members wanted it but continuously explained that the electronic voting system was adequate, but Kiriella kept insisting on a vote by name. Sumanthiran who had been gesturing wildly from his seat to explain that the electronic voting system did allow a vote by name, with the names of individual MPs appearing on the screen with their preference beside each name. When Kiriella did not appear to understand the TNA MP walked up to Kiriella and explained hurriedly while pointing to the screen that the electronic vote had captured every MPs name and the way they had voted that day. There was no profanity evident in the exchange reporters and MPs nearby who heard the conversation told Colombo Telegraph.

“I pointed out that an electronic vote was indeed a vote by name and that it was not necessary to repeat it. I showed him the board that had all the names” Sumanthiran told Colombo Telegraph. Asked why it appeared in the video as if he was angry Sumanthiran added: “Well, it looks like that. But I was mostly amused. I wasn’t angry”

Lakshman Kiriella also confirmed that this was indeed what transpired. “Because the electronic one they took had all the names. So Sumanthiran said no need to go name by name separately”

Keen to portray the TNA as dictating terms to the UNP in a bid to discredit both parties, the illegal Government is resorting to these tactics using racist Facebook pages affiliated to their political project and their own special friends on Twitter.

Senani Samaranayake who is one of Namal Rajapaksa‘s predominant Twitter backers was also indicted in the HelloCorp Money Laundering case along with the former first son. That case is at trial in the Colombo High Court and is one of the case believed to be the reason for former President Mahinda Rajapaksa to accept the premiership and wrest control of the state machinery at this awkward stage and with all the pushback in the hope that as the regime in power the prosecutors and judges can be persuaded to drop the charges or delay proceedings.