Jaffna district Tamil National Alliance (TNA) parliamentarian M. A. Sumanthiran in an interview with Daily mirror , speaks about the current status of the Constitution-making process and future politics. He shared the following:

Q How do you look at the current status of politics?

Well, there was a change in 2015. There were a lot of expectations.  Initially, though the 100-day programme did not finish in 100 days, there were significant achievements – the enactment of the 19th Amendment and the Right to Information Act. After the parliamentary elections, the two main parties got together to solve the national issues.  The constitution making process was undertaken. All those were great achievements. Now looking back, those first year gains were not properly consolidated in the next two years. 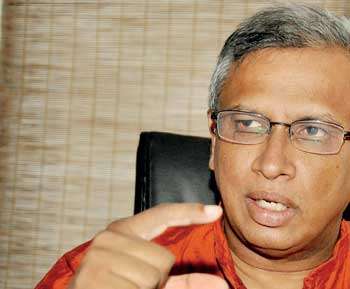 Coalition politics has not been successful all the time. Things changed quite a bit after the results of the local government elections. People have lost faith that whether the government would do all those reforms that were promised, primarily the new constitution.

The abolition of executive presidency and solving the national question were the major changes that were expected. Although the Constitution making process moves forward, it is floundering. A draft will be presented. But, the phase has slowed down drastically losing hope that it will never happen. We still have hope. There is another year also for the present government. We think this government can redeem itself if it sits down to do all the reforms it promised. We will support it in order to achieve all those objectives.

Q How certain are you that this constitution making process will become a success?

Q What are the areas agreed upon?

There is no disagreement on devolution principles. That is one area where, I would say, almost all the members representing the committee agreed. In regard to the abolition of executive presidency, at a particular stage, all agreed except one or two small parties. Subsequently, there has been divergence there. Even the electoral reforms, there was a point that all agreed. That is the 60-40 ratio on the Multi Member Constituency model.

Q As far as devolution is concerned, do you think that there is agreement between the United National Party (UNP) and the Sri Lanka Freedom Party (SLFP)?

Yes, there is agreement on the content.  There was no disagreement.

With the experience we have in regards to the local councils, we have doubt whether the 50-50 ratio for provincial councils will be good at all

Q Is it to devolve power based upon the 13th Amendment?

We never discussed the 13th Amendment. It is a new constitution on the basis of developing power to the province.  Even on the details, there was no disagreement.

Q What are the contours of devolution you agreed upon?

The principle of subsidiary was accepted.  What can be done at the lowest level should be done at the lowest. What cannot be done at that level should be given to the next higher level. That was agreed without any dissent. Then, there is a proposal to have a Second Chamber with provincial representatives. It is something that can act like a safeguard for devolution. As for the national policies, the provincial participation in national policy formulation in the province concerned is ensured.

Q In the meantime, the JVP has presented the 20th Amendment to the Constitution. What do you think about it?

The JVP’s position is that executive presidency should be abolished. They say it is impossible to enact a new Constitution. Therefore, they want to get the abolition of executive presidency done. At one point during the deliberations of the Steering Committee, there was consensus in this regard.

Q What is the TNA’s position in this regard?

Q Northern Province Chief Minister C.V. Wigneswaran is making direct allegations against you. He is from your party? Are you willing to respond?

I do not intend to respond to him because his term will be over in a month’s time. Thereafter, we will have to wait for the provincial council elections. In the east, we have not had elections for a year now. We will force the government to hold elections as early as possible. Once the elections come, we will sit together and decide on our teams.

Q Does it mean that you will not re-nominate him as your party’s chief ministerial candidate?

We have not taken any official decision in regard to that. My position is that he cannot be re-nominated. I spoke to the majority of party members. One basic reason is that he has campaigned against his own party at the last parliamentary and local government elections. That itself disqualifies him.

Q Who did he support to?

Q The government was able to postpone these elections using piece of legislation enacted with the support of your party. In retrospect, do you regret your decision?

Not really. That was done because we had come to an agreement in regard to the system of elections to Parliament – the MMC.   The same system is to be introduced for local governments and provincial councils.With the experience we have in regards to the local councils, we have doubt whether the 50-50 ratio for provincial councils will be good at all.

Q The two- year period envisaged in the UNHRC resolution to implement its recommendations will lapse in March, next year. How do you look at the process so far?

The government delay that report. The report came out in September, 2015. A consensual resolution was adopted on October 1, 2015. Similarly, one and half years’ time was given. When that time lapsed in 2017, the government sought further time. That was granted until March, 2019. We find that most of the matters have not been implemented yet. The government has not commenced work even on the matters that have been touched upon. It is up to the UNHRC’s decision.

Q How do you find the international scenario in this regard, especially in the context of the US no longer being there?

In 2012 and 2013, Sri Lanka was opposing these sorts of resolutions. In 2016 and 2017, the government of Sri Lanka acceded to the resolution and cosponsored it. Sri Lanka itself has agreed. In the UNHRC, it is a consensual consensus. Sri Lanka agreed and it is not possible for it go back on this promise. The absence of the US will not make much of an impact.

*But, the US is not there to push for the implementation of the resolution?

You need not be in the council to do it. They will still support is.  When a vote is taken, of course, the US will not be there.

The government has not commenced work even on the matters that have been touched upon. It is up to the UNHRC’s decision

Q The US seems to be talking different approach towards Sri Lanka under the Trump administration. What is your view?

I do not say the US’ position has changed.

Q How do you look at the next presidential election?

The TNA is for the abolition of executive presidency. If it is done, there won’t be any presidential election.  That is our position. If it happens anyway, we will take a decision at that time.

Q Do you see the rise of the Rajapaksa camp politically in the south as a disturbing trend?

Q But, it is still the single largest party…

Yes. That is right.  We urge the parties that were together at 2015 elections to stay together for the future  as well.