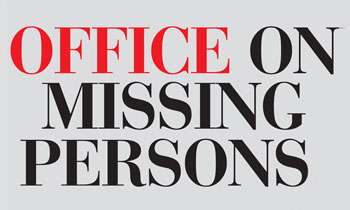 In its first interim report, the Office on Missing Persons (OMP) recommended the government to suspend state officials including members of the armed forces and police who were named as suspects or accused in criminal actions relating to abductions and enforced disappearances, pending the final determination of such cases.

The OMP report said the government should ensure that suspected officials are not transferred, promoted or offered any other office in the armed forces, police or the public service while cases against them are pending.

“Some individuals suspected of having committed enforced disappearances and related offences are being permitted to remain in positions of power, especially within the armed forces and the police, where they can influence the progress of investigations. There have been instances where members of the armed forces, who were willing to provide information on disappearances, were subjected to harassment,” it said.

The OMP said that in at least one case, an officer of the armed forces who is a suspect in an on-going court case relating to abductions and enforced disappearances has neither been suspended nor removed from exercising the duties and functions of his office.

“There are reports that in at least one case, an officer has been granted a promotion within the armed forces, while the case against him is still pending. The OMP notes that under relevant regulations as well as the rules and established practices, it is reasonably expected for such suspected officers to be suspended from exercising the duties and functions of their office,” it said.

It said all incidents of arbitrary arrest, torture and deaths in custody should be investigated.

While urging the government to recognize the continuing nature of enforced disappearances, the OMP recommended the government to immediately formulate policies to provide interim relief to the family members of the missing persons.

These interim relief included financial aid programmes, debt relief programmes, housing development programmes, educational support programmes and also an employment quota of 1% within the state sector for the family members of the victims.

A National Day for the Disappeared, preserving mass grave sites as memorial spaces and restoring ‘Ahinsakaramaya’ – Memorial for the Innocents – in Battaramulla in a manner that reflects the views of the public as well as the families of the missing and the disappeared were also recommended.

In terms of the Office for Reparations, the OMP said the proposed Office will play a pivotal role in providing redress to victims of the missing and the disappeared as well as others affected by the conflict.