TNA Legislator M.A. Sumanthiran, recalls being 19 years old when communal violence rocked the capital city in July 1983. Packed off to Jaffna where the Government thought Tamil families residing in Colombo and other parts of the south would be safer, he recalls an arduous four-day journey in a small cargo ship, with no food provisions on board. The memory of the communal riots has left a lasting legacy – the feeling that such attacks could happen at any time, because they were Tamils. Sumanthiran explains in a poignant interview with the Sunday Observer this week, as the country marks 35 years since horrendous violence was unleashed against people of his community 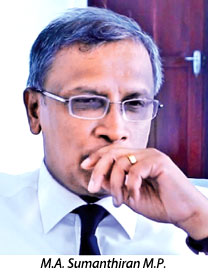 On the Morning of July 25, Tamil National Alliance Parliamentarian Mathiaparanan Abraham Sumanthiran, was a 19-year-old student preparing for his A/L Examinations. As a result he was at his home in Campbell Place, Dehiwala to pursue his studies. He recalls mobs arriving in broad daylight, carrying swords, poles and torches alike. These mobs were transported in vehicles and dropped off at different locations. “They had the electoral register in hand, they knew where the Tamils were, and they just went to these houses,” he says.

At the time there was a Buddhist temple down his road. The Viharadhipathy from this temple walked to the top of the road and stopped the mob, who then set fire to the first house, before leaving, the prominent Tamil legislator recalled in an interview last week. A second mob, which reached the lane from the bottom of the road in the afternoon, proceeded to attack several houses. Again, the monk appeared to stop them, Sumanthiran said. “Our house was left unscathed, but some people arrived again in the evening and threatened saying they will be back in the night. This compelled us to leave our house and take refuge in the house of then Chairman of the Insurance Corporation, Chanaka De Silva, who was my father’s boss,” he says.

After spending four days in De Silva’s house at Charles Circus, Colpetty, Sumanthiran and his family left Colombo for Jaffna on the first ship that carried Tamil refugees – many of whom had called Colombo home – out of the capital on July 29 1983.

“Later this day came to be known as ‘koti (Tiger) Friday’ since there were rumours that the LTTE was going to attack Colombo. As our ship left the Colombo port, I saw Pettah burning,” Sumanthiran recalled.

The journey on the small cargo ship from Colombo to Jaffna had lasted four days. Because of the violence in the city, the ship carrying displaced Tamils had left port in a hurry, carrying no food and provisions on board. “We starved for the next four days, surviving on a little water and a few biscuits available,” he says.

After spending about a month in Jaffna, Sumanthiran returned to Colombo with his family, by road, to sit for his A/L Examinations which had been postponed to September. “We found our house intact but soon after my examinations my parents took me and my sister to India and admitted us to Universities there. Although I was subsequently admitted to Peradeniya University, I remained in India and completed my degree at the Madras University,” he says.

It was not the first time the Tamil MP had been unceremoniously moved out of the city he called home, by the Government. Sumanthiran recalls that in 1977, his family was airlifted from Ratmalana to Palaly in Jaffna, due to widespread violence against the Tamils in Colombo. “Memories of this came back in 1983 when it happened again. In 1977 I didn’t see any mobs, but we feared the house would be attacked – we were at their mercy,” he told Sunday Observer.

The two experiences of uncontrollable violence had left a sense of fear that it could happen to them any time – “because we are Tamils,” he added. “Whenever there appear to be ethnic or religious tensions in the country, these fears emerge,” Sumanthiran admits.

On both occasions, when there was violence being unleashed against the Tamils, the state ‘despatched’ them to Jaffna because they could not protect them within the capital, and thought they would be safer in the North. “That realisation convinces me that the North is our homeland, whatever anyone might say about the concept of homeland. This was where I would be safe, and the state itself conceded that fact,” he asserted.

The TNA lawmaker acknowledged that if not for the actions of the Buddhist monk from the temple in his neigbourhood, his family house would have been attacked.

As much as he commends the monk’s action and whenever he hears similar stories of Sinhalese protecting their friends during the violence, it only reiterates for him that Tamils can not seek security as an equal citizen from the state structure.

“Instead, we are forced to depend on the benevolence of others, which is one of the greatest insults a state can bestow upon its citizens.”

The Thirunelveli spark that set off communal flames

Three and a half decades ago, 13 soldiers were killed by landmines planted by the LTTE in Thirunelveli, an area between Jaffna and Palaly. Considered to be the largest number of military deaths due to LTTE activity at the time, the incident set off a wave of anti Tamil riots in the country, which lasted for a week starting from July 24, 1983, a period referred to as Black July that forever left a black mark in the country’s history. The military convoy was led by Lieutenant Vaas Gunawardena, who perished alongside 12 others, with only two surviving the attack.

Following the Government plans to bury their bodies in Borella Cemetery backfiring, violence erupted overnight covering Colombo in fire and smoke. A week later, Colombo was full of charred ruins of burnt buildings and refugee camps the then Government referred to as welfare centres. The civil war that spanned the country for next three decades was considered to be the legacy of Black July. Today, Thirunelveli remains a commercial hub of the area, with no traces remaining to tell tales of the monumental incident that took place 35 years ago.