Sri Lanka is sleepwalking into a Rajapaksa dynasty characterized by illiberal democracy, state-dominated inefficient capitalism and ethnic chauvinism, after a failed test of good governance by an unholy coalition of left and right wing parties for three years, according to Prof. Razeen Sally, Chairman of Colombo-based think tank, the Institute of Policy Studies (IPS). 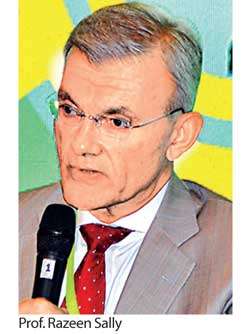 Delivering a public lecture last week on the topic ‘Capitalism in Asia and what it means for Sri Lanka’, organised by Advocata Institute – an open market advocacy – Prof. Sally said the present government is doing its best towards a Rajapaksa restoration.

“It can sleepwalk its way back to a combination of illiberal democracy, state-led very inefficient capitalism and ethnic chauvinism or in other words, it can walk its way back into a Rajapaksa restoration, which this government plays the best part towards,” he said.

Alternatively, Sri Lanka can liberalize its economy, carry out crucial institutional reforms for productivity growth and have strategic relationships with civilized friends in the US and India, particularly for strong economic and security purposes, Prof. Sally said, pointing out the economic, political and global challenges facing Sri Lanka in its journey towards efficient capitalism.

According to him, Asia’s productivity and efficient capitalism towards a large extent have been restricted by state sector inefficiency, crony capitalism and weak small and medium enterprises.

Prof. Sally, a classical liberal policy hawk, has long been advocating for a capitalism characterized by open markets not limited to goods but to all areas such as labour, land, property and financial system, which gives individual liberties but with very strong institutions and limited government role in the economy.

Samaraweera last year revised laws easing restrictions on foreign property ownership in Sri Lanka and issued gazettes extending opening hours of liquor shops and also said women too can buy or sell liquor over the counter, only to find the latter withdrawn by President Maithripala Sirisena days later.   Earlier this year, the government signed a free trade agreement with Singapore and kept provisions open for movement of labour for specific sectors and last week said it is forging ahead with the highly debated Economic and Technology Co-operation Agreement (ETCA) with India.

Prof. Sally, who is also an Associate Professor at the Lee Kuan Yew School of Public Policy, National University of Singapore, is known for prescribing the same classical liberal pill for all nations, irrespective of their socio-economic, political and cultural differences and is seen always taking the Western democracies as the model that should be followed by the rest of the world.

But Prof. Sally, who identifies US President Donald Trump an “isolationist”, is of the view that the US, which maintained a stable region and progressive liberalisation in Asia so far, is now in a descend as a global power, which according to him, is being taken over by China.

He expressed his worry over the ascendancy of China as a regional power in Asia because he was sceptical whether China would be successful in maintaining a conflict-free stable Asia, with its own autocratic rule at home.

He also fears that China’s mercantilism could become contagion in Asia.   Hence, Prof. Sally hopes that the US would soon find its rightful role and continue to lead the world and Asian region, while Sri Lanka forging stronger ties with the US and India for its economic and security purposes.

Prof. Sally’s liberal economic theory appears to be taking into account only the wealth of a nation in terms of dollars or rupees, with scant or no regard for possible negative externalities during the journey to create that wealth, for which, many of the developed world is now trying to find answers for by predominantly looking back, specially by trying to find their lost identities.

For instance, a strong movement is building up in the West against free movement of people, unfair trade, which has killed millions of jobs under the guise of free trade for over three decades and amassed wealth among a few individuals and a handful of nations.

Further, it’s unclear whether liberal capitalism pays any heed to key human values such as empathy, which is not captured by a country’s gross domestic product.