The Viyathmaga effort of Gotabaya Rajapaksa to position himself as the next candidate to run for Presidency in 2020 needs serious address. Last week we sprung question number one to him. No reply. 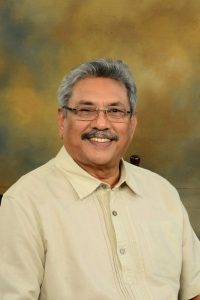 We ask question number two from him.

If you say it was Sarath Fonseka who was responsible for the assault, abduction and torture of Keith Noyahr and the killing of Lasantha Wickrematunge, why did you not say so when you and your brother were in power and why did you not charge him (Fonseka) for such criminal acts?

The Viyathmaga entourage standing proudly behind it must consciously place their hands on their hearts and ask this question from him. Serious.

Do these acolytes know the meaning of AHIMSA? Does Gota know the meaning? Lasantha named his daughter AHIMSA at birth. He was killed violently. A bolt gun was used. Who brought such gun to the City?

His Postmortem report was fudged. His bones were exhumed after a change of government. Explain that to Ahimsa now that you wish to run for President.

Question Number One: Gota A Wanker Over His “Concerns” Of Public Sector Corruption