The commemoration of those killed in the north during the war has by now been a matter generally accepted, formalised with all northern Tamil political parties except the Eelam People’s Democratic Party (EPDP) and the Northern Provincial Council organizing commemorative events.

The main events are to be held today at Mullivaikkal in Mullaithivu District, where the final battle between the Government forces and the Liberation Tigers of Tamil Eelam (LTTE) was fought.In the first few years after the end of the war, the commemoration of the people killed in the north was not openly held. Only small groups led by politicians such as 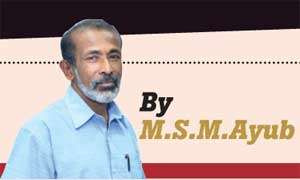 Provincial Councillor M.K. Sivajilingam travelled all the way to Mullivaikkal for such events.

However, now the main Tamil political coalition, the Tamil National Alliance (TNA) and even the Northern Provincial Council (NPC) which is a Government body are in the forefront in these occasions.

As the Janatha Vimukthi Peramuna (JVP) commemorates their colleagues  who laid down their lives during their two insurrections, on two separate days, the northern politicians too, observe remembrance of those killed in the ethnic war on two separate days.The JVP hold their Bak Maha Viru Samaruwa (Remembering of April heroes) on April 5 and the Il Maha Viru Samaruwa (Remembering of November heroes) on November 13.

It was on April 5, 1971, that the JVP launched its first insurrection. JVP founder leader Rohana Wijeweera was killed by the Army on November 13 in 1989 during its second uprising.The LTTE venerated November 27 as its “Great Heroes Day” (Maveerar Naal) in commemoration of its first cadre Shankar, who died on November 27, 1982 and those killed at the final phase of the war are being remembered on May 18 on which  day, LTTE leader Velupillai Prabhakaran is believed to have been killed by the Army in 2009.After the decimation of the LTTE leadership, the other Tamil parties except for the EPDP hold their commemorations on both November 27 and May 18 which is now called Mullivaikkal Day.

“While JVP remembrance is accepted, what irks the south about Mullivaikal remembrance?”

In spite of the popular belief that Prabhakaran was killed on May 18, 2009, retired Major General Kamal Gunarathne, who happened to command the regiment that killed the LTTE leader had told our sister paper Sunday Lankadeepa last week that it was during a skirmish in the morning of May 19 that his soldiers killed Prabhakaran.The JVP’s commemorations are now not seen as events unlawful or inimical to the national security as the party’s professed cause has been socialism and the leaders of the party had several times renounced violence in their struggle for that end.

However, the commemorations in the north has always been controversial mainly for two reasons – firstly, holding those events on a day assigned by the LTTE (November 27) for the purpose and on the day the LTTE leader was believed to have been killed (May 18) and secondly, holding them in the cemeteries earmarked by the outfit for the purpose and in the place where Prabhakaran was believed to have died.It is always alleged that the northern politicians commemorate the LTTE in the guise of remembering the civilians killed in the war- that being a major reason for the southern aversion towards the northern commemorations.

Another reason for that antipathy especially by the Sinhalese is the genuine fear that those events might revive the dreaded rebel organization.Despite the fact that the northern people suffered gravely at the hands of the LTTE by way of their taxes, restrictions, brutal punishments, destruction of infrastructures such as the railway service and road network and their conscription of children, they love and respect the organization and even venerate its leader.Even those who opposed and hated the LTTE during its heyday seemed to be unhappy, when it was defeated by the security forces as they viewed it as a triumph by a Sinhalese force over a Tamil force.

“JVP commemorates their colleagues who laid down their lives during two insurrections, on two separate days

The LTTE venerated November 27 as its Maveerar Naal in commemoration of its first cadre Shankar, who died on November 27,”

Only the members of the parties such as the EPDP,  who were hunted down by the LTTE until the end of the war, might have felt relieved, if not being happy, by the decimation of the LTTE leadership.Whether one accepts it or not, this strong sense of nationalism is one aspect that the southern people and politicians have been refusing to recognise, while the northern Tamil leaders and the people reciprocally refuse to recognise the southern people’s nationalistic fears of secessionism and terrorism.During the commemoration events, while the northern people weep over the deaths of their loved ones, the politicians eulogise the bravery, commitment and the sacrifices of the LTTE cadres, which in fact had sometimes been incredible.As the southern people extol the sacrifice of soldiers such as the famous Hasalaka Gamini, who blew up an improvised LTTE armed vehicle at Elephant Pass in 1991, Tamil politicians glorify and eulogise hundreds, if not thousands of LTTE cadres who blew them up or, bit the cyanide capsule believing that it would help “emancipate the Tamils from the clutches of the Sinhalese Government.”The Government is always concerned about this glorification of the LTTE cadres especially coupled with the demand for a solution to the ethnic problem as it might lead the Tamil youth to follow the path of those thus glorified.This is not an unjustifiable concern as almost all ingredients for another uprising by the Tamils exist on the ground, in spite of their first armed struggle having been crushed and the leaders who led the struggle having been eliminated.Tamil leaders and the media express a belief in self-rule for the Tamils in the north and east, irrespective of the question remaining as to what it means.They claim that the successive Governments, even after the end of the war, had hoodwinked them.

“Another reason for that antipathy is the fear that those events might revive the dreaded rebel organization.

Northern  leaders refuse to recognise the southern people’s fears of secessionism and terrorism.”

Demonstrations and fasts are taking place occasionally in the north over the lands of the northern people occupied by the army during the war, the thousands of people who disappeared during the war and those languishing in prisons for years sometimes even without being charged. When these agitations are prolonged along with occasional glorification of the former rebels, one cannot rule out the possibility of youth being pushed to follow their yesteryear heroes.However, the Tamil leaders too would not prefer such a situation though they attempt to gain political mileage from these commemorations.They are not prepared to lead such armed struggles or at least to participate in them. Most of these political leaders were deemed as traitors by the LTTE till 2000, irrespective of the fact that some of them represented the armed groups formed in the 1980s to fight for a separate Tamil State.In 2000 some invisible hands made them all of a sudden recognize the LTTE as the sole representative of the Tamil people and the LTTE to remove the “traitor” tag attached to them reciprocally. Even after that they, except for the EROS (Eelam Revolutionary Organisation of Students) led by V. Balakumaran were not prepared to take to arms.Before 2000, LTTE killed many moderate Tamil leaders including Leader of the Opposition Appapillai Amirthalingam, (Leader of the main Tamil coalition, the Tamil United Liberation Front (TULF).Northern Province Chief Minister C.V.Wigneswaran who is now in the forefront in glorifying the LTTE leaders was a judge of the Supreme Court that made rulings on the basis that the LTTE was an outlawed terrorist group.Therefore these leaders would not be prepared to see another armed uprising by the Tamil youth.Despite the danger of reigniting the fires of war, one cannot deny the right of the northern people to weep over their loved ones, who were killed or disappeared during the war and even to eulogise the LTTE cadres’ dedication and the sacrifice towards what they think is their emancipation.On the other hand, despite the right of the northern people to commemorate their loved ones, one cannot accept anybody encouraging another ethnic war. This is the tricky aspect of the commemoration of the dead in the north.