By Skandha Gunasekara and Ashwin HemmathagamaPrime Minister Ranil Wickremsinghe yesterday emerged victorious after he managed to decisively defeat the much anticipated No-Confidence Motion with a comprehensive majority of 46 votes and will meet President Maithripala Sirisena today to decide the future of the government. At the conclusion of a full day debate of nearly 12 hours Speaker Karu Jayasuriya moved the House for a vote on the motion. The motion against Prime Minister Wickremesinghe received 76 votes in favour and 122 votes against at a division by name. The division was called by Leader of the House Minister Lakshman Kiriella. A total of 26 MP were absent for the vote. Among  them were two signatories to NCM Nishantha Muthuhettigama and Karder Musthan. 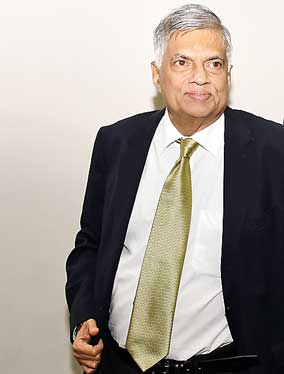 The UNF voted against the motion in a show of strength, backing the Premier with even dissident MP Wijedasa Rajapakse closing ranks unexpectedly. The minority parties led TNA, SLMC ACMC, Mano Ganesan and P. Digambaram (TPA), who are part of the UNF, bolstered the support for the Prime Minister by voting against the No-Confidence motion. There was eleventh hour change of heart from vocal State Ministers Wasantha Senanayake and Palitha Ranga Bandara as they voted against Motion.However, as promised, the six members of the JVP voted in favor of the motion.  Former President Mahinda Rajapaksa who was absent during the debate, voted in favor of the motion, along with his brother MP Chamal Rajapaksa and son MP Namal Rajapaksa.Independent MPs Athureliya Rathana Thero and Arumugam Thondaman were absent for the vote.  The SLFPers who voted in favor of the motion included Parliamentarians Susil Premajayantha, Dayasiri Jayasekara, Dilan Perera, John Seneviratne, Lakshman Wasantha Perera, Dr. Sudarshani Fernandopulle, Tharanath Basnayake, Susantha Punchinilame, Anura Yapa, S. B. Dissanayake, Lakshman Yapa Abeywardena, Chandima Weerakkody, Anuradha Jayaratne and Sumedha Jayasena.Notable SLFP Members of the Government who were absent included Mahinda Amaraweera, Sarath Amunugama, Nimal Siripala De Silva, Duminda Dissanayake, Faizer Mustapha, Ranjith Siyambalapitiya, Wijith Wijyamuni Zoysa, Piyasasena Gamage, Mohan Lal Grero, Sriyani Wijewickrama, MALM Hisbullah, AHM Fowzie, Lasantha Alagiyawanna, Manusha Nanayakkara, Nishantha Mutuhettigama, Indika Bandaranayake and Weerakumara Dissanayake.The No-Confidence Motion was handed over to the Speaker by the Joint Opposition led by former President Rajapaksa on 21 March carrying the signatures of 55MPs including four SLFP members in the Government ranks. The defeat of the motion ended a 14 days game of cat-and-mouse between the UNP and the Opposition, each trying to garner the required numbers to secure a simple majority of 113 votes.

Correction: This article previously innacurately stated that 122 MPs voted in favour of the No Confidence Motion. It has been corrected to state that 122 voted against the motion. We apologise for any inconvenience caused.