It was just a road rage!  Two vehicles end up at a petrol station after one was prevented from overtaking the other on a narrow road in the Central Province of Sri Lanka.  Soon, a verbal dispute escalates into a physical altercation. Many such disputes end peacefully and some others with verbal abuse of each other. A few end up in physical attack of each other. This particular road rage fell into the last category in which one person succumbed to serious wounds after a week in the Teaching Hospital in Kandy. Four were arrested and remanded by the police.

This ordinary, but tragic incident gained a massive racial and religious overtone no sooner the death of the injured person was announced. He happened to be a Sinhala Buddhist and the four other men happened to be Muslims. Their religious backgrounds fitted the Sinhala supremacist narrative neatly; ‘Muslims have killed a Sinhala Buddhist’. This news spread like wildfire across the region and far beyond where Muslims live as a numerical minority amongst the majority Sinhala Buddhists.

As part of funeral arrangements up to several kilometres of the road leading to the small village of the deceased person were decorated with white flags by the villagers in the area. Multiple Sinhala ultra-nationalist groups across the country led by the Buddhist monks flocked to the region and went on looting and then burning Muslim houses, shops and mosques, and vandalized public roads whilst looking for Muslims travelling on vehicles. One person was killed after been trapped in a shop that was set on fire and another died of a heart attack caused by the trauma. All these happened in the presence of the Sri Lanka’s elite police commandos and armed forces. The government declared a state of emergency all throughout the country, imposed curfew in the particular region, deployed military in thousands and blocked social media.  Yet the reports, including footages of CCTV cameras installed at houses and shops, from the region revealed that the Sinhala gangs mostly led by the Buddhist monks roamed openly day and night whilst expanding their attacks from Muslim village to village. Many, including the former President Mahinda Rajapaksa, accused the current Maithripala-Ranil regime of inaction or not implementing law and order promptly. The Sinhala liberal intelligentsia blamed the government of not curbing the ‘extremists’. It has also being portrayed as communal violence; a Muslim-Sinhala riot as anti-Tamil pogroms were coded as Sinhala-Tamil riots. 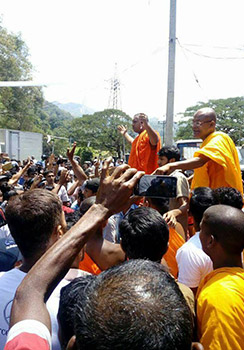 Would proper implementation of law and order have stopped another episode of anti-Muslim attacks on the island?  If so, how come the Sinhala gangs could engage in their violence in the presence of police and military amidst curfew? Does this happen simply because of some extremists who are disconnected from an ‘inefficient’, but ‘neutral’ state?

The most gruesome and wide spread pogrom against a non-Sinhala national community in the history of the island took place in July 1983 against the Tamils with the overt and covert support of both the then government politicians and law enforcement institutions. According to widely accepted figures over 3000 Tamils were killed and half a million were displaced within a week. Up until today not a single person has been charged.  The end of the 35 year war was marked by the  Sri Lankan state’s (led by the former president Rajapaksa) military victory over the Liberation Tigers of Tamil Eelam (LTTE) that became a formidable political force amongst the Eelam Tamils in the North and East particularly after 1983 anti-Tamil pogrom.  This military victory was heavily backed by the UK, USA and India. It claimed, according to the UN reports, lives of over 70,000 Tamils and asserted Sinhala supremacist politics in an unprecedented way throughout the entire island. The need of the global and regional powers who aided the war was to secure the unitary Sri Lankan state against the LTTE who led the sub-state of Tamil Eelam. Both the leaders of the former and the present regimes have been competing with each other in promising the Sinhala masses that they would not betray the security forces to any tribunal that would investigate the mass atrocities committed against the Tamils. The US-led UNHRC Resolutions openly upheld the unitary state structure by endorsing the article 2 of the Sri Lankan constitution which calls to safeguard ‘independence, sovereignty, unity and the territorial integrity’ while failing even to mention that the ‘Tamils’ were the victims. John Kerry, the former US Secretary of State, went even further when he stated that transitional justice has to be sought whilst safeguarding ‘heroism and professionalism’ of the Sri Lankan security forces.

It is against this background that one has to understand the current phase of anti-Muslim attacks on the island. Attacking non Sinhala – Buddhist communities is not a crime, but an act of Sinhala heroism! This mindset is not an extremist position, but an institutionalized one. Without this supremacist ideology the institution of unitary state cannot be maintained. In such a setting, law and order are on the side of the Sinhala supremacists and not on the side of the Tamil and Muslim victims. The hollow slogan  ‘we are all Sri Lankans’ is simply a political rhetoric which is meant to conceal the true character of the Sri Lankan state.

The recent anti-Muslim violence is the third major attack that has taken place in the aftermath of the Sri Lankan state’s military victory over the Tamil Tigers in 2009. The Muslims had been  already vilified during the military campaign against the Tamils (2005-2009) by the Sinhala ultra-nationalist political party, Jathika Hela Urumaya (JHU), who accused the Muslims of ‘occupying’ and ‘defiling’ the Sinhala Buddhist heritage in the Eastern Province. The JHU has been a coalition partner of both the previous and the present regimes. However, when the war unfolded the main enemies were the Eelam Tamil people. Muslims were not specifically targeted due to tactical caluclations.

In the aftermath of the war, another racist Buddhist group Bodu Bala Sena (BBS) was formed – with the covert support of the regime – which developed close ties with similar ultra-nationalist Buddhist groups in Burma and Thailand. The BBS embraced the Western Islamophobia immensely and followed the same fascist arguments of the far right groups in Europe and USA against Islam and refugees. The group led a massive island-wide anti-Muslim campaign mobilizing the Sinhalese against Halal and to boycott Muslim-run business. Whilst large scale land grab, militarization and Sinhala Buddhicisation of the North and East were being sponsored by the state as part of the military victory over the Eelam Tamils, Islamophobia made its way deep into the Sinhala psyche in the South. This made the Sri Lankan state further glued to the Western imperialist complex which has found a new enemy in Islam, replacing the ‘Communist Evil’. 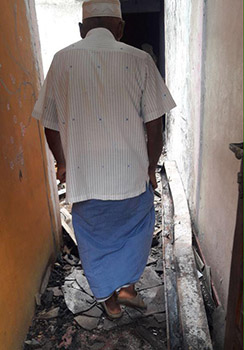 The current phase of violence against the Muslims is part of the logic of Sinhala supremacist politics upon which the Sri Lankan state has been built since the British colonial times; reinforced after so-called Independence in 1948 and further consolidated through the military victory over the LTTE in 2009 which was called Second Independence. In the 16th century, the Buddhists and Muslims fought together against the Portuguese, the first Western colonizer of the island. In the beginning of the British colonial period in the early 19th century, the Sinhalese and Tamils resisted their coloniser together and also independently from one another in their two distinct regions. However, later on as the British constructed a single unitary political structure on the island, the numerically majority Sinhalese were treated as a ‘chosen race’ and the Tamils and Muslims were portrayed as invaders. It is this colonially constructed supremacist mindset which has become the hallmark of the Sri Lankan state.

In conclusion, the attacks on Muslims cannot be termed as part of communal violence. Nor can these be simply a result of breakdown of law and order or actions of extremist groups. ‘The Eelam Tamils who demanded self-determination have been militarily defeated. Let us teach a lesson to the Muslims now’ – This is not the mindset of a few extremist Sinhala Buddhists. It is solely a reflection of the way which the Sri Lankan state has been structured; its unitary character, exclusivist nationalist ideology and the support it gets from global powers. These are the constitunet elements that form the power base of the state and condition the the Sinhala mindest. In return, the Sinhalese expect the state to be on their side against the non-Sinhalese. That is why the Sinhala ultra-nationalist groups demand the regime to release those who were arrested for attacking the Muslims in the Central Province just as they claim the right to colonize the North and East.

The same monks who are engaged in land grab from the Tamils and Muslims in the Eastern Province were involved in leading the anti-Muslim attacks in the Central Province. The Tamils have been subjugated militarily and denied of their nationhood. Total impunity has been granted to the direct perpetrators. Now the Muslims have been despised, attacked and left without any justice. This common fate of  oppression creates a common ground between the Tamils and Muslims to resist the state. Such resistance carries a potential even to unshackle the Sinhalese from their house of bondage which has been created for them by their Slave Masters.

Regimes can be changed, but all new regimes will continue to stand by violent perpetrators to protect the Sinhala-dominated unitary state as long as the racial hierarchies and oppressive structures remain intact. Therefore, the active participation of STF commandosin perpetrating violence against hill country Muslims is neither an aberration nor a failure to uphold law and order, but a routine brutal reflection of an institutionalised racist mindset which gained a new momentum in the aftermath of crushing the Tamil resistance. The ‘unruly mob’ vs. ‘disciplined troops’ is a false binary. Both are bound by a common ideological thread that legitimises the violent subjugation of non-Sinhala Buddhists.

The Sri Lankan state is Sinhala by language, Buddhist by religion and colonial in its political structure and ideology. It is this state which has been ‘saved’ from the LTTE by a global alliance, which revitalised the Sinhala Buddhist belief in their ethno-religious superiority over the others living in the island. Following the military victory in 2009 unitary state has been consolidated as never before and Sinhala supremacism has reached its peak.

Hence, anti-Muslim attacks are not a betrayal of the so-called war victory or a ‘hard-won peace’. It is an inevitable outcome of that genocidal military triumph.

Dr. Jude Lal Fernando, Assitant Professor in Intercultural Theology and Inter-religious Studies  is the Director of the Centre for Post-Conflict Justice in the University of Dublin. He served as the Coordinator of the Peoples’ Tribunal on Sri Lanka.