The signing of Memorandum of Understanding (MoU) between the Government of Sri Lanka (GoSL) and Liberation Tigers of Tamil Eelam (LTTE) in February 2002 engineered many prospects, promises and hopes about many burning issues.  Among them, the fate of political prisoners, prisoners of war and the disappeared were also vital. They were not just limited within the political spectrum, rather it had untold and unheard stories of human suffering from all people affected by war, particularly from mothers, wives and sisters.

It was early 2003. An elderly mother came to the Jaffna office of the Human Rights Commission (HRC) of Sri Lanka. She was tired. She could not even walk properly. She asked for a glass of water to take her medications, which indicated that she had been unwell, but she was determined in her search to find out the fate of her son.

At that time, the Jaffna HRC had a name list of persons who were detained in prisons outside of the Northeast. She went through the list twice without lifting her head. She could not find the name of her son on that list. As a result, indeed, she was worried. She looked at me with disappointment and asked me if it was the only list available. After my response, she also asked me, if it was it OK for me go through the list on her behalf, just  in case if she missed any names. I did, but unfortunately I could not give her the answer she had been searching for since May 1997. 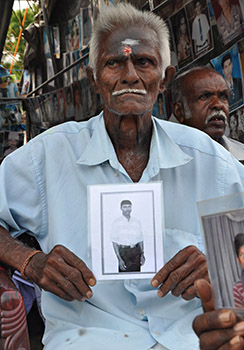 “I went to several astrologers and all of them said he is alive. Even a parrot that came out from a cage and took a card that presented my son is alive. I know, he will come before my death. I wanted to cook and feed him all his favorite foods before my death,” the tearful mother told me before she left the office.

Now 15 years on, the island experienced a new wave of enforced disappearances. Many disappeared immediately after the end of war in May 2009. According to the International Crisis Group, since 2009, “Tamil women in the north and east have led the national quest for truth and justice, particularly for enforced disappearances. It began informally, when mothers and wives went to military camps and stood by the roadside with pictures and placards searching for loved ones who had been detained or gone missing. In time, these women began to organise themselves at the village and district levels to visit detention centres and military camps and meet visiting political leaders about their loved ones.”

It will soon be nine years since the war came to an end, but confronting the past and encountering the future remains threatening.

Like many others, the Tamil women who led the search believed that with the regime change in Sri Lanka in January 2015, they would finally get answers, but their hopes went in vain.

Therefore, the families of the disappeared began peaceful protests in five places throughout the Northeast in early 2017, namely, Kilinochchi, Mullaitheevu, Trincomalle, Maruthankerny and Vavuniya. The protests are about to reach their 400th day. Eight elderly parents of the disappeared have passed away during the course of these peaceful protests. They just want to know what happened to their beloved sons and daughters, their husbands and wives and their grandchildren who have disappeared.

“We started this protest to hold the Sri Lankan Government accountable for its actions in the final phase of the civil war in 2008-9. After eight years we need the truth but the Government of Sri Lanka, which claims to believe in transitional justice, has ignored us, trampled on our feelings and shown us nothing but disrespect. Basic human dignity means we should be heard.” “We would like to spend at least a few days with our children before we die.”

Due to death threats, intimidation and military surveillance, some key activists such as Balendran Jeyakumari and her teenage daughter no longer take part in any protests. Still, many families of the disappeared continue their struggle through resistance, persistence, audacity and determination. 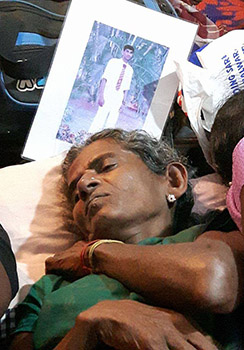 Sri Lanka’s President Maithripala Sirisena met with the families of the disappeared in June and November last year and promised to release a list of who were handed over to the military by the families at the end of the war in 2009. During the June meeting with Sri Lanka’s President, families handed over a memo laying out five key demands: (1) releasing a list of all those who surrendered or were detained by the Sri Lankan armed forces during and after the war, particularly during the last phase; (2) releasing a list of all secret detention centres, their status and list of detainees; (3) releasing a list of all detainees held under the PTA and detainees held in detention centres; (4) releasing these lists to representatives from the families of the disappeared; and (5) releasing in public all reports by commissions appointed over the years to address the issue of disappearances and the Government’s response to those reports. To date, none of the demands have been heeded by the government, despite numerous public pledges.

In contrast, the Sri Lanka’s President has stated that there are no torture camps or secret detention centres, despite the United Nations Working Group on Enforced or Involuntary Disappearances confirming the existence of an “secret underground detention cum torture center”in Sri Lanka.  Sri Lanka’s Prime Minister Ranil Wickrememsinghe, who also denies existence of any secret detention centres, stated that the disappeared “probably dead”. A year later, Wickrememsinghe said missing persons may have left the country illegally. The families of the disappeared are deeply disturbed by these statements. Even, the so-called “good governance” government could not even release the list of detainees. Due to a lack of confidence in the government, the families of the disappeared were compelled to seek support for their plea from a section of the international community. During the reign of the Rajapaksa government, war-affected Tamil women took great risks and provided testimonies to a section of the international community, particularly to the UN with the hope that it will help them to discover the fate of their loved ones. However, the international community’s ‘soft diplomacy’ approach to Sri Lanka has only served to allow the government to place issues of truth, justice and accountability on the backburner, said a joint civil society statement. The government failed to deliver its domestic as well as international commitments in relation to human rights and accountability. There has been no any strong action from the international community to put pressure on the government to act constructively.

In Operative Paragraph 12 of the UN Human Rights Council Resolution 30/1, the government committed to review and repeal the Prevention of Terrorism Act (PTA). This draconian law has directly led to widespread abduction, torture, disappearance and impunity. The GoSL words do not match their deeds.  Except for rhetoric promises, the government has failed to deliver any significant progress either to repeal the PTA or to combat enforced disappearances, ongoing torture and end the prevailing culture of impunity.

For the families of the disappeared, particularly for the mothers, despite darkening clouds, there is a glimpse of hope that their sons and daughters are alive somewhere and they will return to home one day. Therefore, they continue to fight to find the truth. Through every protest, every picture or story of the disappeared, they keep their sons and daughters alive. Through the memories and hope, their struggle continues. Their struggle is not only to find out the fate of their loved ones, rather to prevent a recurrence of enforced disappearances on the island.

Nirmanusan Balasundaram is an exiled journalist and a human rights defender. He holds an MA in Peace and Conflict Studies from the European University Center for Peace Studies in Austria.